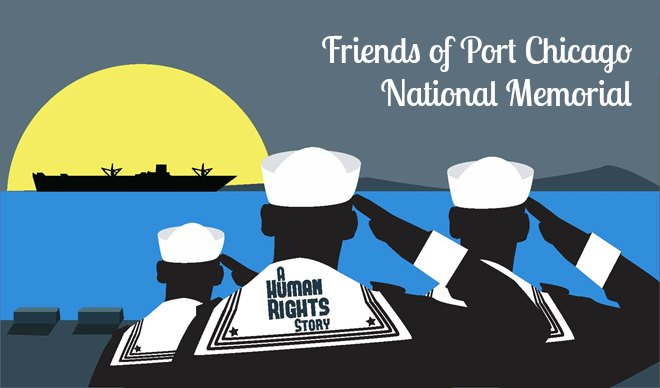 The Port Chicago National Memorial, a unit of the National Park System, commemorates the historical significance of the Port Chicago disaster and its impact on African American history and the United States Armed Services.

MEET OUR BOARD OF DIRECTORS

In July of 1944, the largest explosion on the mainland of the United States jolted the Bay Area, instantly killing 320 sailors, the majority of whom were young African Americans. The subsequent refusal of fifty of the remaining sailors to resume loading munitions until their safety could be assured resulted in the most significant mutiny trial in our history. Their cause, supported by Eleanor Roosevelt and Thurgood Marshall, ultimately led to the desegregation of the Navy and later the entire military. A commemorative ceremony of the explosion is held annually by the National Park Service.

The tragedy at Port Chicago has been documented in popular culture, including, among other productions, a jazz suite written by the composer Marcus Shelby, an episode of the television series “JAG,” a documentary featuring Danny Glover as narrator, a feature film for television produced in 2000 by Morgan Freeman, and a play that premiered in 2009 in Los Angeles. Despite these productions the history of Port Chicago – the explosion, those who died and those who protested – remains largely unknown to most Americans, and yet important to us all.

In 2009, President Obama signed the Defense Authorization Act, which included the establishment of the Port Chicago Naval Magazine National Memorial in Concord, California as the 392nd unit of the National Park System.

The Friends of Port Chicago National Memorial exists to support the park, promote the history of and increase access to the Port Chicago Memorial. Your support will help us preserve and introduce this unique heritage which we all share.

“The addition of Port Chicago demonstrates a commitment to make America’s best idea even better – more relevant to Americans, more expressive of our nation’s history, and more representative of our diversity.” – Jonathan B. Jarvis, Director, National Park Service