This website and web hosting is sponsored by KeithKamisugi.com. 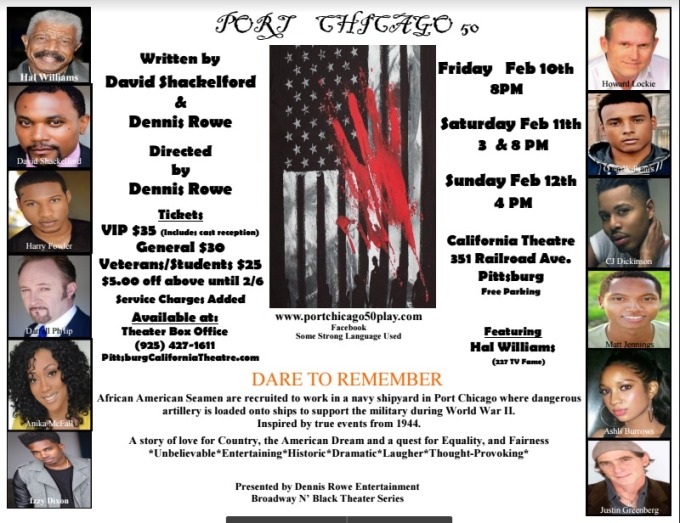 ‘Port Chicago 50’ is a story of love for Country, the American Dream and a quest for Equality and Fairness.

The performances are at the California Theater, 351 Railroad Avenue, Pittsburg, CA 94565.

General seating tickets are only $30.00, $35.00 for VIP Seating and $25.00 for Veterans and Students. A VIP ticket includes a Meet & Greet Cast Reception after the show. Service charges are additional. There is a $5.00 discount off each ticket purchased by Monday February 6, 2017. Tickets can be purchased at the theater box office or on-line at www.PittsburgCaliforniaTheatre.com or by phone at (925) 427-1611. Seating is limited.

It’s July 17th in Port Chicago, California, a cool summer Friday night at a munitions naval 30 miles north of San Francisco. The year is 1944 and World War 2 is in full swing. Segregation in the United States is prevalent and African American soldiers are being pushed by their commanders to load tons of dangerous missiles and explosives onto two large munition ships.

Not one of these men has been properly trained to handle munitions, yet they are given orders and expected to load huge amounts of the highly dangerous cargo as quickly as possible.

At approximately 10:17pm, something went terribly wrong. Explosion after explosion! So fierce, it shook the ground with the force of an earth quake. Knocking out windows and shaking building as far east as Boulder City, Nevada. What happened next is even more mind-boggling than the explosion itself.

Reading the newspaper reports, you are now treading in waters filled with chaos, anger, blame, finger pointing, and more importantly guilt. None of these officers in the higher ranks were willing to take the responsibility for this tragedy.

What happened that cool summer night? How did it happen? Why? Meet the Seamen before, during and after that fated night. The dramatic story is told through the eyes of one of the survivors, Freddie Meeks. Come and witness this powerful presentation of “Port Chicago 50”. I dare you!